Hard drives have to operate at thousands of rpm , work all day long and maintain a distance of the order of microns between the head and the platter (as we got to know in the lab). So, it is natural the hard drives “die”,i.e., they stop working eventually, resulting in the loss of our data and problems for us.But the S.M.A.R.T. supported drives may just tell you before its going to die, to save us the heartburn.

I stumbled upon this term when we had to collect information about our processors,hard drives and system memory. So I tried to find a little more about this lifesaving technology.So here's what i found....

S.M.A.R.T. stands for ﻿Self-Monitoring, Analysis and Reporting Technology and it tries to anticipate hard drive failure by keeping an eye on many of the drive’s crucial properties.

S.M.A.R.T. support is built into most ATA and SCSI hard drives these days. If a hard drive has S.M.A.R.T. support , then it keeps monitoring itself for signs which may lead to a drive failure and warns the user/administrator so that he/she may be able to copy the data to another location before the drive dies.

The first drive monitoring system was introduced by IBM in 1992.﻿ Another variant was created by computer manufacturer Compaq and disk drive manufacturers Seagate, Quantum, and Conner which was named ﻿ IntelliSafe.﻿ Compaq submitted their implementation to Small Form Committee for standardization in early 1995. It was supported by various other companies including IBM and was chosen by the committee as the standard due to its flexibility and was named S.M.A.R.T.. According to PCtechguide’s page on ﻿ S.M.A.R.T. , the smart technology has evolved from just monitoring hard drive activity for data retrieved by operating system to testing all data and sectors of a drive using “off-line data collection”(when drive is inactive).

Furthermore, some drives also support various self tests and maintenance tests as a part of SMART system to reduce the chances of sudden disk failure.

In linux, one can view the SMART properties using the disk utility or by using ﻿smartmontools' smartctl utility. A detailed article on how to use this utility and more about SMART is available at http://www.linuxjournal.com/magazine/monitoring-hard-disks-smart (i havn’t tried it yet, if anybody tries it ,let me know about the results). 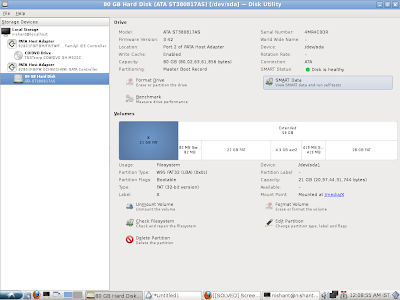 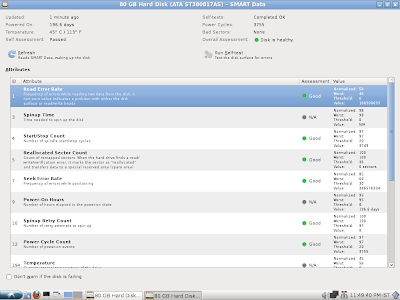