Hello everyone
I wanted to know what is FSB? what are its physical significance & where is it located??
it would be quite helpful for me to undertsand FSB if any of u posts the answer of my doubts
Posted by LOKESH GARG at 11:26:00 PM 6 comments:

PARITY BIT is a bit that is added to ensure that the number of bits is even or odd.
There are 2 types of parity bits:

Even parity is a special case of a cyclic redundancy check (CRC), where the 1-bit CRC is generated by the polynomial x+1. 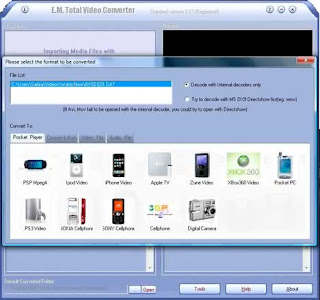 Hello everyone
We all want to have movies or clips on our cell phones but most of us have video clips(in 3 gp) with an awful quality. Imagine hearing some bollywood song in 3gp,it emits a creaking sound here is a solution-
first of all look into your phone's manual and find what are the video formats supported and what is your screen resolution.

if you love to watch clips or songs on your cell log on to www.effectmatrix.com and download total video converter. It is an excellent converter which gives superb video aand audio quality.import files and convert them.You can set the quality screen size etc,if not sure jast select your phone model(if nokia and sony),explore the options.

Movies take a lot of time to convert so you have to compromise with quality,just use freez 3gp converter avaliable on smallvideosoft.com,believe me its the fastest . I have converted a whole dvd by freez in just 38 min 25 seconds !! 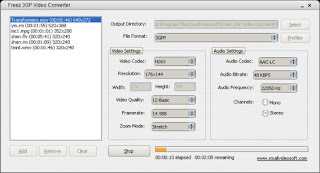 Before i start with this post, i would like to share with my friends that this my first experience at bloging or any sort of posting on the net, i hope it is worth your precious time....

Endianness deals with integer representation in a computer . Now, we all know that there are certain human languages that are read from left to right like English,Hindi and then there are some languages like Arabic that are read from right to left.Similarly, integers are represented as sequence of bytes with the most significant byte on the left(The Big Endian),in some representations, while in others it is placed on the right(The little Endian).

Now lets see the main advantage of the two systems:-
1)The little Endian system has the property that the same value can be read from the memory at different lengths... Therefore, the value read from 32-bit memory can be read from the same address as either 16-bit memory or 8-bit memory. all of which retain the same numeric value.
2)The big Endian representation helps to obtain an approximation of the multi-byte value by reading the most significant portion instead of the complete representation.

For moe info, you can use the following links:-
http://en.wikipedia.org/wiki/Endianness
http://3bc.bertrand-blanc.com/endianness05.pdf
Posted by Anonymous at 8:58:00 PM 6 comments:

Blu-ray discs are optical storage media and look similar to regular CD/DVDs (they are all of the same size). But they can store 10 times the data in a single DVD.

NA = nsinθ ; n = refractive index. Since θ1>θ2, NA(BD) > NA(DVD)
The name "Blu-ray" comes from the blue laser being used to read and write. There are GaN (Gallium Nitride) diodes that produce photons of 405nm directly. 400nm is the wavelength of the violet component of the visible spectrum so the "blue laser" actually appears violet to the human eye. By decreasing the wavelength from 650 and 780nm used for DVDs and CDs respectively, and increasing the aperture from 0.60 to 0.85, the laser can be focused to a smaller area. Hence, more data can be stored in the same amount of space.

In BDs, the distance between the surface of the disk and the surface upon which the data is actually recorded is 0.1mm. This is 1/6 times the distance for a regular DVD. Since the discs are made of plastic, the incident angles can change a little due to disc warping. To check this problem, the NA is increased (to an extent) and the cover layer's thickness is decreased.

And finally, regarding the popularity of BDs, they are mostly used to store HD videos since the regular DVDs can only store Standard Definition (SD) videos. When HDTVs become widespread, BDs are expected to replace DVDs. For the time being, companies such as Sony, Panasonic, Phillips, Samsung, Pioneer and LG have developed BD drives that are compatible with BDs and DVDs both. This is known as Backward Compatibility and is a measure to ensure that once newer media like BDs become popular, the older storage media do not become obsolete.