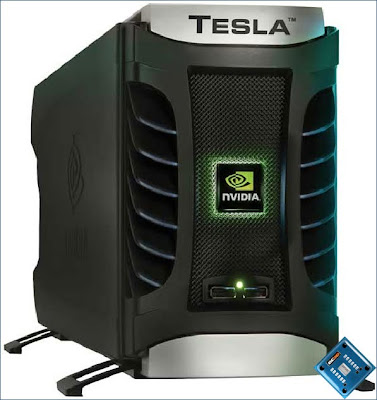 Click on image to enlarge
GPGPU as the name suggests is termed "General Purpose computation on Graphics Processing Units". This is a technique of using a GPU, which is usually used for rendering computer graphics to perform computations of extreme orders which are traditionally handled by a CPU.
To this date, CPUs are known to have a maximum of 12-cores (AMD Opteron 6000 series and Intel Xeon processors) whereas graphics cards these days come with approximately 240+ cores. So you can imagine why there is a growing necessity to use a GPU for computational purposes.
By using a GPU, a normal person can turn his/her Personal Computer into a Personal "Super" Computer.
NVIDIA has such an offering. For more information : Tesla 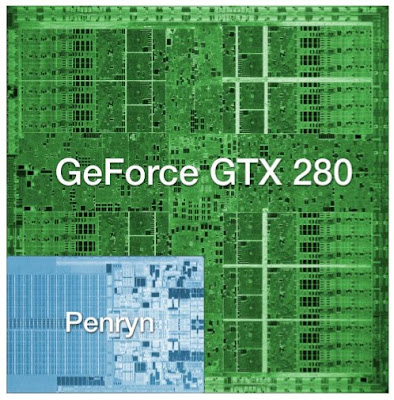 Click on image to enlarge
Fig. 1. A pictorial represtation of the architecture difference between an Intel Penryn processor and an NVIDIA GeForce GTX 280 Graphics card GPU
GPGPU aims at the application developer modifying the application to take the compute-intensive kernels and map them to the GPU. The rest of the work is handled by the CPU. To perform mapping the developer has to rewrite the functions to expose the parallel-ism in them i.e. The developer has to re-write the code to use parallel computing.
NVIDIA uses it's very famous CUDA (Compute Unified Device Architecture) to infuse it's GPUs with the extraordinary compute power.
Some features of the NVIDIA Tesla series GPU Computing processors are : 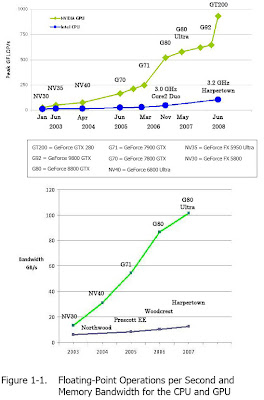 Click on image to enlarge
Fig. 2. A pictorial representation of the difference in performance between a CPU and a GPU over the years.
Applications:
Applications of GPU computing are many including MATLAB acceleration, physical based simulation and physics engines, Tone mapping, Audio Signal processing, Computational Finance, Data Mining, Analytics and Databases, Molecular Dynamics, et cetera.
References:
NVIDIA Tesla-CUDA
GPGPU.org
NVIDIA Published PDF (Must Read) : PDF Link
I hope this post wasn't too mind-boggling. Queries and Comments are always welcome.
Posted by Exotic-Pulse at 9:15:00 PM 2 comments: